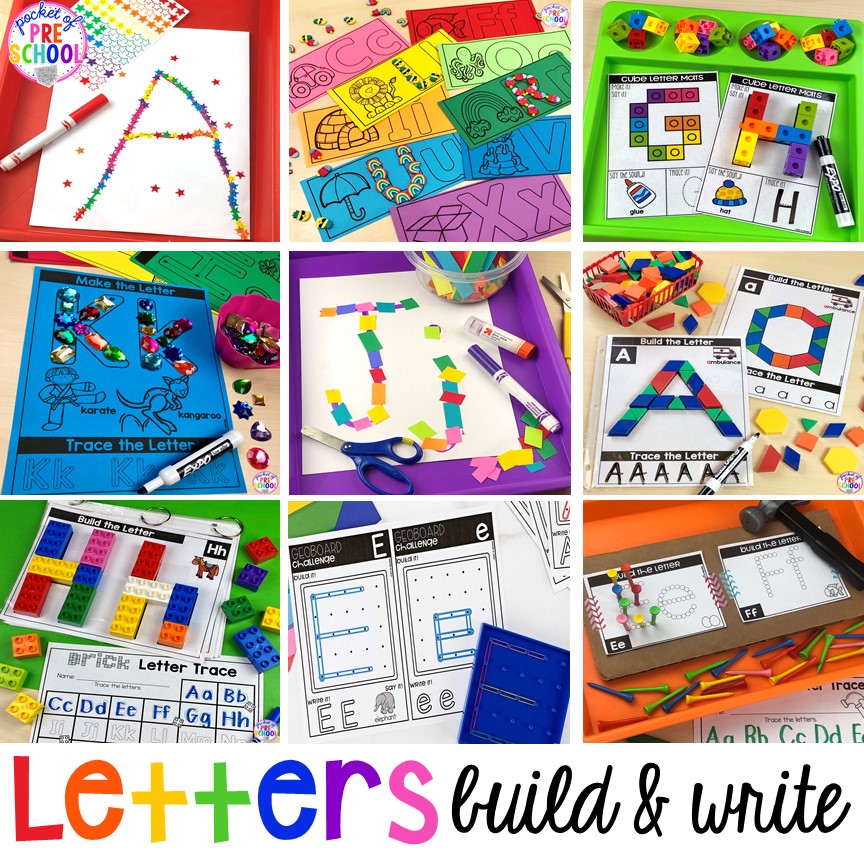 Learning letters is HARD for little learners. There are so many letters in the alphabet, and they look so similar. Build-it letter mats are a fun, hands-on way to teach the alphabet and letter formation (aka handwriting). Students need frequent, repeated, and varied practice to learn the letters of the alphabet. We know students learn best through play which makes letter mats an easy, low-prep way to teach letters in the classroom. Make sure you grab the FREE Letter Build-It Mats later in this post.

Use the letter mats for morning table time, small group, in a center, and/or place the letter mats cards on a ring in the tub of manipulatives. Many of the letter mats have a letter tracing piece to them as well, so now students can also practice writing the letter either with a dry-erase marker, finger trace or with a marker or pencil. Handwriting can be FUN and not painful for students and teachers.

ALL of these alphabet letter mats also build fine motor strength and dexterity. As students manipulate the small objects to create the letters, they are strengthening those small muscles in their wrists, hands, and fingers that are needed for writing!

Grab the FREEBIE by entering your email in the box at the bottom of this post. This post contains affiliate links which means I earn a tiny commission when you use my links at no cost to you. Collage Letters! The teacher or students write the letter on a piece of paper. Then cut paper and glue it to the letter. Students can make the same letter or different letters to differentiate instruction. Sticker Letters! For this letter mat, the teacher or student writes the letter. Then the student places stickers on the letter until the letter is covered. Foam Shape Letters! Again the teacher or student can write the letter, then cover the letter with foam shapes or any foam stickers you have on hand. FREE Alphabet Letter Mats!  These are one of my favorite sets of letter mats because you can use any small manipulative, and students can also trace the letter with a dry-erase marker on the mat! Mini erasers (which I’m sure you have a ton of) are perfect, but you can also use pom poms, glass gems, beads, play dough, or wiki sticks too.

>>Grab the FREEBIE by entering your email in the box at the bottom of this blog post!<< Make-It Alphabet Letter Mats! These are full-page alphabet letter mats that you can use any manipulative with, like mini erasers, pom poms, jewels (these are from Michaels), table scatter, or glass gems. Students build the letter, say the sound, say the words that begin with that letter, and trace the letter. Geoboard Alphabet Letter Mats! Students will make the letter using loom bands or rubber bands on geoboards, then trace the letters on the mat. I like to use these 5-inch geoboards. Duplo Alphabet Letter Mats! Do you have students who are obsessed with big Duplo blocks and reluctant to learn about letters? These are the perfect mats for them because they can build and construct letters with their favorite thing… Legos! The Duplo-size brick blocks fit perfectly on these mats, or you can have students build the letter on a base plate too. This lego set is my favorite because it has just the basic brick blocks in it! There is a matching worksheet for students to do too! Lego Alphabet Letter Mats! If the large Lego mats are too easy for your students, then try these little Lego brick block alphabet mats. You can find the base plates and small Lego-type brick blocks at the Dollar Tree too! Students can build on the mat, on the base plate, or both! Dot-It Alphabet Letter Mats! This is another letter mat you can use with various manipulatives such as mini erasers, pom poms, circle counters, bingo chips, or glass gems. Print the letter mat on copy paper and use it as a worksheet with dot markers. Hammer Alphabet Letter Mats! Students use golf tees to hammer the letter. I mean, what student isn’t going to love this?! You can use thick cardboard or gardening kneeling pads from the Dollar Tree to put under the letter printable. Students can use plastic hammers, wooden hammers (these I have from Amazon), and any golf tees (these are the ones I have). This also builds their hand-eye coordination. Paint-It Alphabet Mats! If you have students who love painting, these are some alphabet letter mats they would love! Grab some Q-Tips, a paint tray (that one is from the Dollar Tree), and some paint, and let the letter-making begin. Use a full sheet or cut the printable into fourths, and students can do one letter at a time. Connecting Cube Alphabet Letter Mats! Students use connecting cubes to build the letter, then say the sound, and trace the letter on the mat. Road Alphabet Letter Mats! Students drive the letter using a small car, then trace the road letter with a dry-erase marker. I found these small cars in the party section at Target, but you can use any small car you have in your classroom.

>>Grab the FREEBIE by entering your email in the box below!<<

These Alphabet Letter Mats are low-prep and go with any theme you are doing. Put them on the table for an arrival center, in the fine motor center, library center, in a tub with the matching manipulatives, or use at nap time for a quiet activity with your non-sleepers. Love it? Pin this image! Turkey hats and turkey cookies are just the cutest

Teach your students all about being thankful…wha

Turkey letter sort and color sort is a fun, hands-

Turkey counting stew! A fun game for a turkey or T